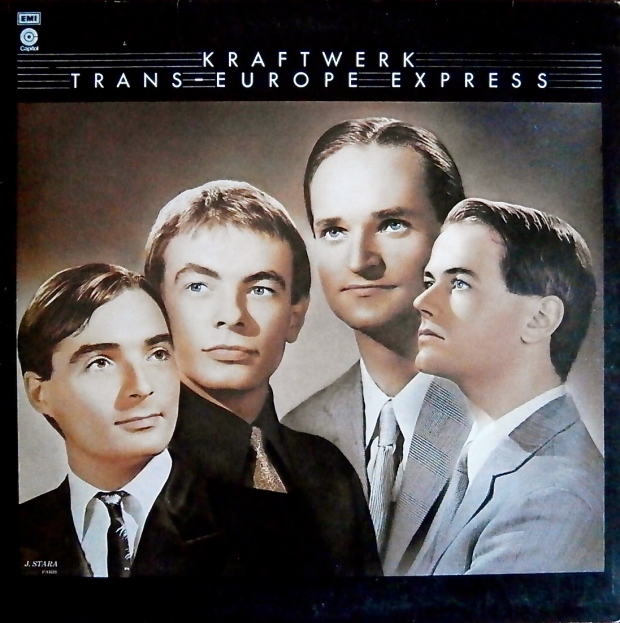 “Trans-Europe Express (German: Trans Europa Express) is the sixth studio album by German electronic music band Kraftwerk. Recorded in mid-1976 in Düsseldorf, Germany, the album was released in March 1977 on Kling Klang Records. It saw the group refine their melodic electronic style, with a focus on sequenced rhythms, minimalism, and occasionally manipulated vocals. The themes include celebrations of the titular European railway service and Europe as a whole, and meditations on the disparities between reality and appearance. … Kraftwerk believed critics in the United Kingdom and the United States associated them with Nazi Germany, with tracks such as “Autobahn” inextricably linked with the Nazis who built the high-speed roads in the 1930s and 1940s. At the same time, the band were keen to move away from their German heritage towards a new sense of European identity and felt that the Trans Europ Express could be used to symbolize this. AllMusic referred to Trans-Europe Express as a concept album with two different themes. The first being the disparities between reality and image, represented by the songs “Hall of Mirrors” and “Showroom Dummies”, and the others about the glorification of Europe. Slant Magazine described the album as ‘a sonic poem to Europe’. The musical style of Trans-Europe Express was described by AllMusic as melodic themes which are ‘repeated often and occasionally interwoven over deliberate, chugging beats, sometimes with manipulated vocals’ and ‘minimalism, mechanized rhythms, and crafted, catchy melodies’. …”
Wikipedia
Kraftwerk Resurrected Pop for a Torn Germany on ‘Trans-Europe Express’
The Story of Kraftwerk ‘Trans-Europe Express’
YouTube: Trans Europa Express (original), Trans Europa Express (Full 7-Inch EP), Showroom Dummies, Franz Schubert

Throbbing Gristle
“Industrial music is a genre of experimental music which draws on harsh, transgressive or provocative sounds and themes. AllMusic defines industrial music as the ‘most abrasive and aggressive fusion of rock and electronic music‘; ‘initially a blend of avant-garde electronics experiments (tape music, musique concrète, white noise, synthesizers, sequencers, etc.) and punk provocation’. The term was coined in the mid-1970s with the founding of Industrial Records by members of Throbbing Gristle and Monte Cazazza. While the genre name originated with Throbbing Gristle’s emergence in the United Kingdom, concentrations of artists and labels vital to the genre also emerged in Chicago. … The precursors that influenced the development of the genre included acts such as electronic music group Kraftwerk, experimental rock acts such as Pink Floyd and Frank Zappa, psychedelic rock artists such as Jimi Hendrix, and composers such as John Cage. Musicians also cite writers such as William S. Burroughs, and philosophers such as Friedrich Nietzsche as influences. …”
Wikipedia
20 of the most iconic songs in industrial music (Audio)
Assimilate: A Critical History of Industrial Music
The 10 Best Industrial Albums To Own On Vinyl
all music: Industrial
amazon: Assimilate: A Critical History of Industrial Music