“Like the epochal Police & Thieves by Junior Murvin, which also originated at Lee ‘Scratch’ Perry‘s Black Ark Studio and thus shares with this album Perry‘s trademark dark, swampy ambience, War ina Babylon is something of a mountain on the reggae landscape. But what makes it so remarkable is not just the consistently high quality of the music — indeed, by 1976 one had come to expect nothing but the finest and heaviest grooves from Perry and his studio band, the Upsetters — rather, it’s the fact that Max Romeo had proved to be such a convincing singer of cultural (or ‘conscious’) reggae after several years of raking it in as a purveyor of the most abject slackness. (His ‘Wet Dream’ had been a huge hit in England several years earlier, and had been followed by such other delicacies as ‘Wine Her Goosie’ and ‘Pussy Watch Man.’) But there’s no denying the authority of his admonishing voice here, and the title track (which describes the violent mood during Jamaica’s 1972 general election) has remained a standard for decades. Other highlights include ‘One Step Forward’ and ‘Smile Out a Style.’ Essential to any reggae collection.”
allmusic
W – War ina Babylon
Lee “Scratch” Perry and the Golden Age of Roots: ‘War Ina Babylon’
YouTube: Max Romeo – War Ina Babylon 37:52

“King Tubby’s music career began in the 1950s with the rising popularity of Jamaican sound systems, which were to be found all over Kingston and which were developing into enterprising businesses. As a talented radio repairman, Tubby soon found himself in great demand by most of the major sound systems of Kingston, as the tropical weather of the Caribbean island, (often combined with sabotage by rival sound system owners) led to malfunctions and equipment failure. Tubby owned an electrical repair shop on Drumalie Avenue, Kingston, that fixed televisions and radios. It was here that he built large amplifiers for the local sound systems. In 1961/62 he built his own radio transmitter and briefly ran a private radio station playing ska and rhythm and blues which he soon shut down when he heard that the police were looking for the perpetrators. Tubby would eventually form his own sound system, Tubby’s Hometown Hi-Fi, in 1958. It became a crowd favourite due to the high quality sound of his equipment, exclusive releases and Tubby’s own echo and reverb sound effects, at that point something of a novelty.”
YouTube: King Tubby Prince Jammy & Scientist
NY Times: RINGING CHANGES ON JAMAICAN REGGAE (April 26, 1981) 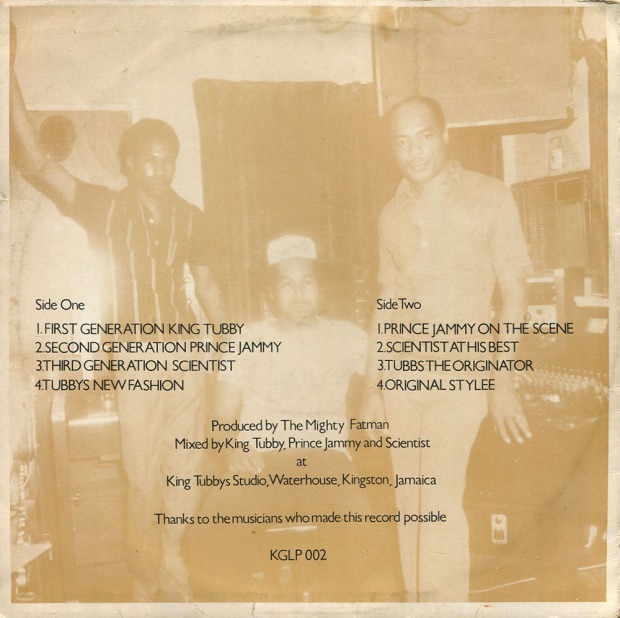 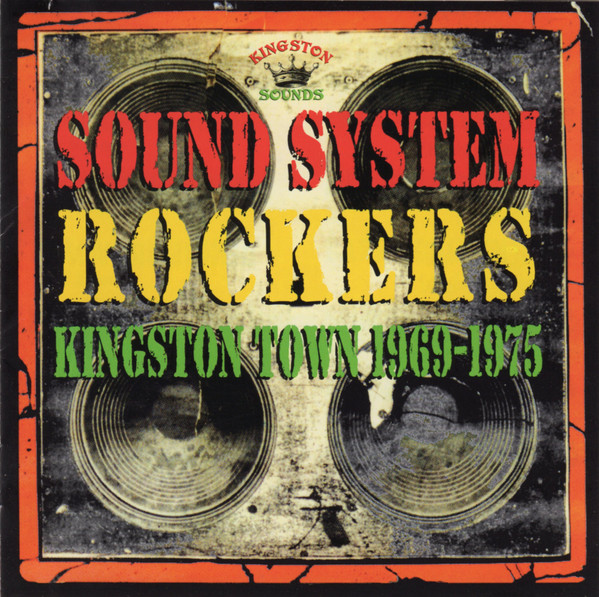 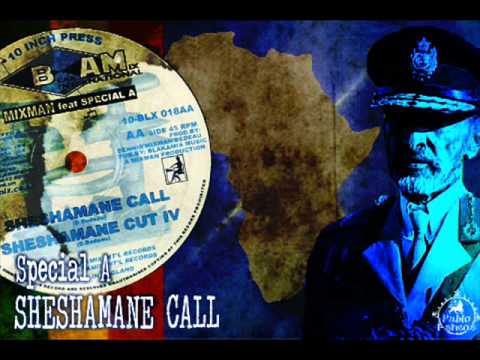 “Pan-Africanism is a worldwide movement that aims to encourage and strengthen bonds of solidarity between all indigenous and diasporan ethnic groups of African descent. Based on a common goal going back to the Atlantic slave trade, the movement extends beyond continental Africans with a substantial support base among the African diaspora in the Caribbean, Latin America, the United States and Canada. … Pan-Africanism stresses the need for ‘collective self-reliance’. Pan-Africanism exists as a governmental and grassroots objective. Pan-African advocates include leaders such as Haile Selassie, Julius Nyerere, Ahmed Sékou Touré, Kwame Nkrumah, Thomas Sankara and Muammar Gaddafi, grassroots organizers such as Marcus Garvey and Malcolm X, academics such as W. E. B. Du Bois, and others in the diaspora. Pan-Africanists believe that solidarity will enable the continent to fulfill its potential to independently provide for all its people. Crucially, an all-African alliance would empower African people globally. The realization of the Pan-African objective would lead to ‘power consolidation in Africa’, which ‘would compel a reallocation of global resources, as well as unleashing a fiercer psychological energy and political assertion…that would unsettle social and political (power) structures…in the Americas’. …”
Wikipedia
YouTube: Special A_Sheshamane Call + Mixman_Sheshamane cut 4, Max Romeo_Selassie I Forever + Mafia & Fluxy_Dubwise, The Heptones_Revolution + Leroy Sibbles_Total Destruction + Baba Leslie_Version, Johnny Clarke_It Dread + Russ D._Dub, Special A_Destiny + Destiny Dub, Vibronics feat. Mark Iration_Struggle + Version, Dan I Locks_Thanks and Praises + Praises Dub + Version, Yabby You_Chant Down Babylon + Version, Johnny Clarke_Dreader Dread + Rastafari Dub

“If you had a taste for underground music in the ‘80s, you almost certainly had multiple releases on the ROIR (pronounced ‘roar’) label in your collection. The tiny New York label’s output was exclusively available on brightly-colored cassettes, with liner notes by noted rock critics like Lester Bangs, Robert Christgau, Byron Coley, Kurt Loder, Jon Pareles, and a pre-Yo La Tengo Ira Kaplan. The catalog included releases by proto-punk and punk legends like the MC5, Television, the New York Dolls (and Johnny Thunders), Nico, the Raincoats, the Dictators, and Suicide, as well as hardcore acts like Flipper and GG Allin, compilations like New York Thrash (featuring the Beastie Boys’ earliest recording), and the Bad Brains’ legendary ‘yellow tape.’ They also released noisy, arty music by Glenn Branca, Christian Marclay, Laibach, and Einstürzende Neubauten. And they balanced their loud, aggro side with releases that revealed label founder Neil Cooper’s passion for dub and reggae, with titles by Lee ‘Scratch’ Perry, Big Youth, Niney the Observer, Yellowman, Bill Laswell, and others. …”
bandcamp (Audio)
Guardian – Label of love: ROIR

Bagga, 1979
“… I became involved with Rock Against Racism after the Battle of Lewisham in southeast London in 1977. This was when a racist march by about one hundred National Front supporters was met with five thousand antiracist activists who had traveled down from all over the country. The Metropolitan Police were determined that the National Front be able to march, so they deployed a quarter of their force, suited with riot gear. This was the first time the police in Britain were militarized, and the officers’ use of riot shields really shifted the goalposts for activists—we were up against something different now. At the same time, Eric Clapton had just delivered a horribly racist tirade onstage, in support of Conservative politician Enoch Powell’s ‘rivers of blood’ speech. We realized we needed to grab the headlines to counter the right-wing media’s high profile, and our first major event was a carnival in April 1978—a huge concert in the Victoria Park in Tower Hamlets. We didn’t want it to just be a free rock concert, though; we wanted it to be a demonstration. …”
ARTFORUM
Guardian – Rock Against Racism: the Syd Shelton images that define an era
Interview – Syd Shelton
Rock Against Racism: Syd Shelton’s photographs of a movement in 1970s Britain
W – Rock Against Racism
vimeo: Archive in Focus: Syd Shelton, Rock against Racism 7:19

Darcus Howe (with loudhailer) addresses a crowd from on top of a toilet block, 1977. 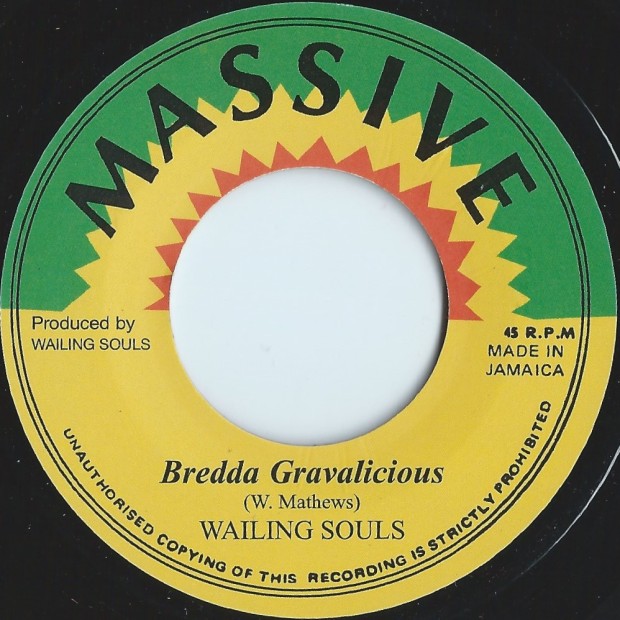 “The consummate roots band, the Wailing Souls may never have gained the international reputation of their compatriots, at least not at the height of the genre’s popularity, but they did outlive most of them. Their very survival has been their greatest strength, that and their ability to diversify over time. Today they are one of the most popular live acts around and they continue to release provocative and popular albums. A roots band they may well be, but their history actually stretches back long before the birth of that genre, as far back as the heyday of ska. The Wailing Souls’ story begins with Winston ‘Pipe’ Matthews. As a youth living in Kingston in the early ’60s, Matthews learned to sing at the feet of Joe Higgs. Higgs, although himself barely out of his teens, was already a veteran vocalist with a string of hits to his name, and coached up and coming talent in his tenement yard. His most famous protégés were, of course, the Wailers. …”
allmusic
Discogs (Video)
YouTube: Bredda Gravalicious

“Leroy smart, Dennis Brown, Carl dawkins, Althea + Donna, Toyan and more.  Le Mellotron is all about people and music. In the beginning it was a blog that quickly takes the shape of a webradio gathering a growing community of music curators and lovers. Located in a bar just steps from Place de la Republique, in the heart of Paris, Le Mellotron beats day after day to the rhythm of the city, its people and streets. We strongly believe in a an emerging parisian musical scene, moved by its curiosity, able to capture and transform its worldwide influences. LeMellotron will be its amplifier.”
YouTube: Babylon Rockers #3 • Special guest Ganja Tree
Mixcloud (Audio)

“Catch a Fire was the major label debut for Bob Marley and the Wailers, and it was an international success upon its release in 1973. Although Bob Marley may have been the main voice, every member of the Wailers made valuable contributions and they were never more united in their vision and sound. All the songs were originals, and the instrumentation was minimalistic in order to bring out the passionate, often politically charged lyrics. Much of the appeal of the album lies in its sincerity and sense of purpose — these are streetwise yet disarmingly idealistic young men who look around themselves and believe they might help change the world through music. Marley sings about the current state of urban poverty (‘Concrete Jungle’) and connects the present to past injustices (‘Slave Driver’), but he is a not a one-trick pony. He is a versatile songwriter who also excels at singing love songs such as his classic ‘Stir It Up.’ Peter Tosh sings the lead vocal on two of his own compositions — his powerful presence and immense talent hint that he would eventually leave for his own successful solo career. More than anything else, however, this marks the emergence of Bob Marley and the international debut of reggae music. Marley would continue to achieve great critical and commercial success during the 1970s, but Catch a Fire is one of the finest reggae albums ever. This album is essential for any music collection.”
allmusic
W – Catch a Fire
YouTube: Stir It Up (Live), Concrete Jungle – The Grey Old Whistle Test, Slave driver
YouTube: Catch A Fire 1973 Full Album