“It’s not easy to come up with a second act when your first act was being Jim Carroll. He was the author of ‘The Basketball Diaries,’ a cult-classic memoir of his drug-fueled misadventures as a teenager in the 1960s; he then became a celebrated downtown poet; and then, the star of his own hit rock band. Mr. Carroll had lived a panoramic New York youth that his fans had turned into legend. But by the time he died of a heart attack this Sept. 11 at 60, Mr. Carroll, who had once hung out with the Rolling Stones and Allen Ginsberg, no longer bore much resemblance to the downtown cover-boy with the chiseled cheekbones and flowing red hair. His once-powerful athlete’s body had been weakened by pneumonia and hepatitis C, said Rosemary Carroll, his former wife, who had remained a close friend. At times, circulation problems in his legs prevented him from leaving his apartment. His trademark hair was flecked with gray, and often tucked under a wool beanie. His cheekbones were hidden behind a white beard that plunged to the collar of his T-shirts. …”
NY Times: Jim Carroll’s Long Way Home
Genius (Audio)
W – Jim Carroll
“People Who Died” – by The Jim Carroll Band – February 16th 80’s Quest Song/Band of the Day (Video)
The Basketball Diaries by Jim Caroll – The Paris Review 1988
YouTube: Lou Reed – People Who Died w/ Jim Carroll – 9/25/1984 – Capitol Theatre, People Who Died 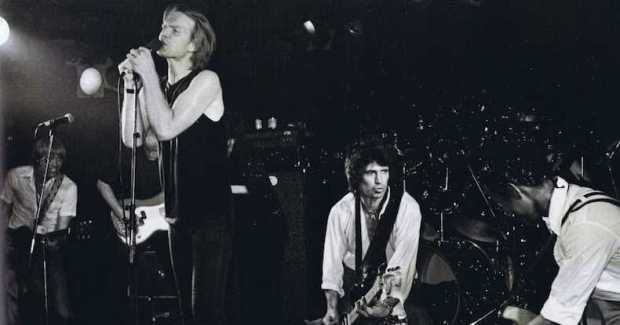 “After decades of being circulated on inferior-sounding bootlegs, the January 1972 reconvergence of Velvet Underground (VU) co-founders Lou Reed (vocals/acoustic guitar), John Cale (guitar/viola/piano/vocals), and Nico (vocals/harmonium) in Paris at Le Bataclan has been committed to commercial release. A suitably noir mood hangs over them as they stonily amble through VU staples and key entries from their concurrent solo endeavors. They commence with a slow and almost methodical “Waiting for the Man” as Cale offers up a simple piano accompaniment to Reed‘s casual guitar and lead vocal. Reed aptly describes the bleak torch reading of ‘Berlin’ as his ‘Barbra Streisand song’ before unveiling a profoundly minimalist interpretation. It captures the unnerving mood inescapably defining the city in the wake of WWII. They return to the early VU for an inspired ‘Black Angel Death Song.’ Reed‘s rhythmic chiming guitar incongruously fits beside Cale as he whittles away an austere viola counterpoint. Back briefly to Reed‘s eponymously titled debut for a very Dylanesque delivery of ‘Wild Child.’ The reconnection between the duo begins to jel significantly, if not audibly throughout an intense ‘Heroin,’ immediately recalling what makes the Cale/Reed combo so appealing. Cale seizes the reigns for the melodically and lyrically involved ‘Ghost Story’ from Vintage Violence (1970). One rarity is Cale‘s ‘Empty Bottles,’ which he contributed to Jennifer Warnes‘ Jennifer (1972) album. Nico finally takes the spotlight for a healthy sampling of her work, couching a trio of post-VU efforts around three of her most memorable sides during her brief time in the band. They saunter into an intimate and warmly received mini-set featuring ‘Femme Fatale,’ ‘No One Is There,’ and ‘Frozen Warnings’ of off Marble Index (1969), as well as ‘Janitor of Lunacy’ from Desertshore (1970). The show concludes with another trip into the VU songbook on a comparatively optimistic ‘I’ll Be Your Mirror’ duly juxtaposed against an edgy and sinister ‘All Tomorrow’s Parties.’ While fans and pundits hopefully proclaimed the performance as the return of the Velvets, alas it would not be so. Le Bataclan ’72 (2004) is a no-brainer for all dimension of VU, John Cale, Lou Reed, and/or Nico enthusiasts.”
allmusic
W – Le Bataclan ’72
Pitchfork
Discogs
YouTube: Lou Reed, John Cale, and Nico at Le Bataclan 1972 (Live) 17:39
YouTube: Le Bataclan ’72 Live (Full Album) 1:17:59