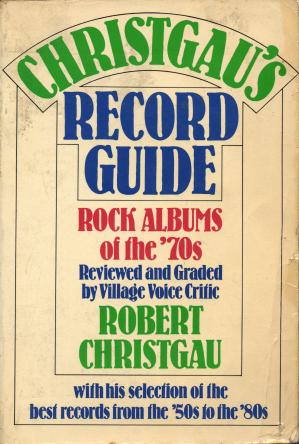 “Christgau’s Record Guide: Rock Albums of the Seventies is a music reference book by American music journalist and essayist Robert Christgau. It was first published in October 1981 by Ticknor & Fields. The book compiles approximately 3,000 of Christgau’s capsule album reviews, most of which were originally written for his ‘Consumer Guide’ column in The Village Voice throughout the 1970s. The entries feature annotated details about each record’s release and cover a variety of genres related to rock music. Many of the older reviews were rewritten for the guide to reflect his changed perspective and matured stylistic approach, informed by an interest in the aesthetic and political dimensions of popular music and a desire to communicate his ideas to readers in an entertaining, provocative way. The guide was critically well received, earning praise for its extensive discography, Christgau’s judgment and colorful writing. Reviewers noted his opinionated tastes, analytical commentary, pithy language, and critical quips. The book appeared on several expert lists of popular music literature. …”
Wikipedia
Christgau’s Record Guide: Rock Albums of the Seventies