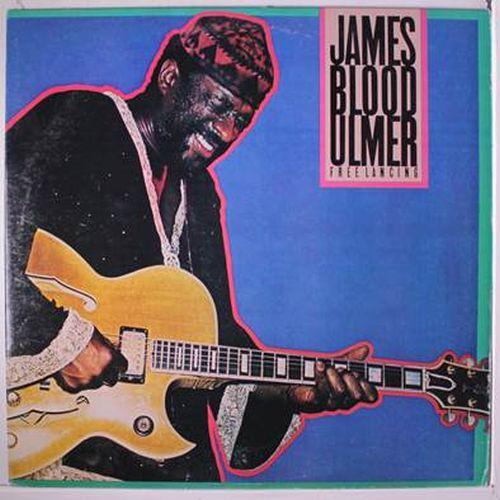 “After cultivating a huge underground reputation both as a sideman in Ornette Coleman‘s Prime Time band and as an increasingly influential musician among the more experimental edges of the New York City punk and noise scenes, James Blood Ulmer was finally, in 1981, given a major-label contract by Columbia. Free Lancing was the first of three albums for the label before he, like many before and after, was unceremoniously dropped. It opens explosively with ‘Timeless,’ a ripping instrumental showcasing Ulmer at his best, all jagged angles, raw blues feeling, and chainsaw guitar shards. One of several cuts with only the trio of Ulmer, bassist Amin Ali, and drummer G. Calvin Weston, it’s the guitarist at his most elemental, brutal, and real. Other tracks lean toward the funky side of things, with the leader’s vocals (always at least a bit reminiscent of Hendrix) and a few female background vocals that impart a certain simmering sexiness even as they always serve to ‘slickify’ the final product. But even here, on tracks like ‘Where Did All the Girls Come From?,’ Ulmer manages to raise the stakes far beyond the standard jazz-punk-funk of the period. Three other songs import the impressive horn trio of David Murray, Oliver Lake, and Olu Dara, used to provide a supremely strutting back line on ‘High Time’ and giving the trumpeter a fine, fat solo on ‘Hijack’ (a tune that recalls Ronald Shannon Jackson‘s Decoding Society). But it’s Ulmer‘s stinging guitar lines — rough-hewn, corrosive, and scrabbling — throughout this recording that make it one of his finest. ”
allmusic (Audio)
W – Free Lancing
YouTube: Free Lancing 10 videos