“In a December 1975 interview with Jane Scott of The Plain Dealer, a heavyset, wild-haired Cleveland singer known as Crocus Behemoth declared, ‘We’re putting out the hits of the next psychedelic era. If a melody fits in, fine. If not, we don’t feel we have to use one. We’re a bit ahead of our time, but that’s the fun of it.’ Mr. Behemoth was referring to his new band, Pere Ubu. Although they were yet to play their first show, they were already a familiar proposition in the nascent Midwest punk scene. Three months earlier, Cleveland proto-punk heroes Rocket From the Tombs self-imploded, leaving behind a trail of half-finished songs and tales of self-destruction and farce-filled gigs. Of its classic line-up – which Lester Bangs once called ‘the original legendary underground rock band’ – Gene O’Connor and Johnny Madansky formed Frankenstein, before settling on the name The Dead Boys. Meanwhile, the shrieking Crocus Behemoth, otherwise known as David Thomas, reunited with RFTT founding guitarist and livewire Peter Laughner, before recruiting second guitarist Tom Herman, bassist Tim Wright, drummer Scott Krauss and synthesist Allen Ravenstine. Pere Ubu was born. …”
The Quietus – 40 Years On: Pere Ubu’s The Modern Dance Revisited
W – The Modern Dance
Graded on a Curve: Pere Ubu, The Modern Dance
YouTube: The Modern Dance 10 videos 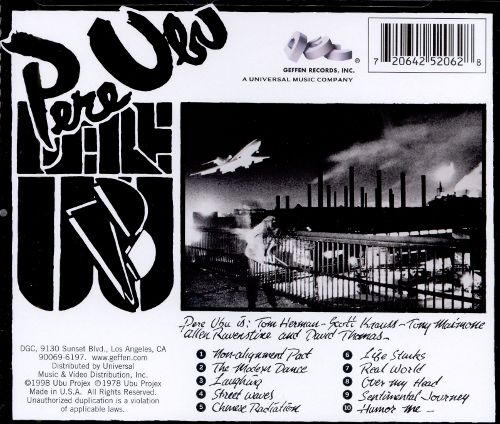