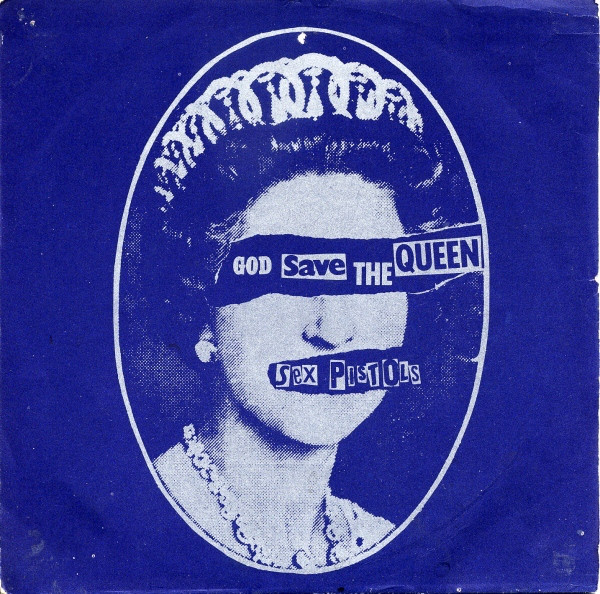 “‘God Save the Queen’ is a song by the British punk rock band the Sex Pistols. It was released as the band’s second single and was later included on their only album, Never Mind the Bollocks, Here’s the Sex Pistols. The song was released during Queen Elizabeth II‘s Silver Jubilee in 1977. The record’s lyrics, as well as the cover, were controversial at the time, and both the BBC and the Independent Broadcasting Authority refused to play the song. The original title for the song was ‘No Future’, with the lyrics themselves being a general expression of the band’s view of the Monarchy or any individual or establishment commanding general obligation. … The single was released on 27 May 1977, and was regarded by many of the general public as an assault on Queen Elizabeth II and the monarchy. The title is taken directly from “God Save the Queen‘, the national anthem of the United Kingdom. At the time it was highly controversial, firstly for its equation of the Queen with a ‘fascist regime’, and secondly for the lyric ‘there is no future in England’s dreaming’. … Johnny Rotten has explained the lyrics as follows: ‘You don’t write ‘God Save The Queen’ because you hate the English race. You write a song like that because you love them, and you’re fed up with them being mistreated.’ He intended to evoke sympathy for the English working class, and a general resentment towards the monarchy. …”
Wikipedia
Telegraph: God Save the Queen at 40: how the Sex Pistols made the most controversial song in history (Video)
The song that had one British politician wishing for the Sex Pistols’ ‘sudden death’
YouTube: God Save The Queen (Live), God Save The Queen – 1/14/1978 – Winterland, God Save The Queen