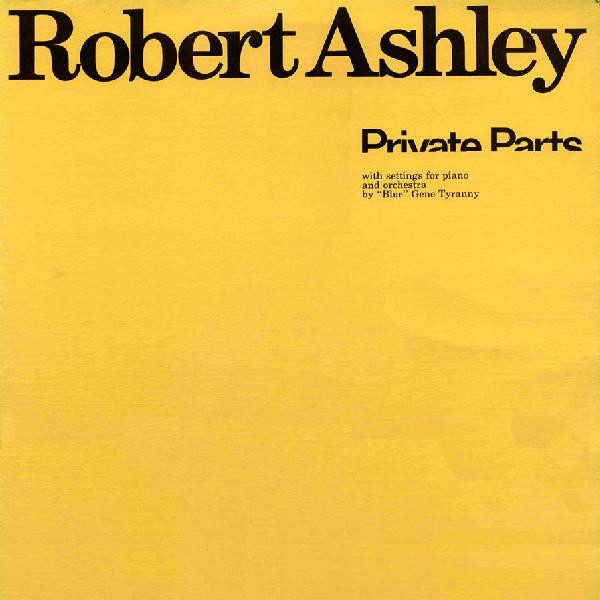 “Robert Ashley’s Private Parts has a plot, but you wouldn’t know it. The 1978 LP, which would later serve as the foundation for the composer’s seven-part televised opera Perfect Lives, discusses at length the inner workings of two characters, a man and a woman, anonymous to us and perhaps even to each other. Words flood its 40-plus minute runtime, circling meaning but never arriving at a conclusion. What’s explored by Ashley, in his drawling monologues, seems to be everything that isn’t happening—an inversion that slinks and dances among the shadows. We are privy to his subjects’ fidgety obsessions, tics of behavior, heady ruminations and psychic detritus, but narrative, insight, or meaning remain as elusive as a not-quite-remembered dream. Private Parts is built on emptiness. It is startling just how riveting that emptiness can be. … The album is structured into two episode-length pieces. At just over 20 minutes each—presumably, he was anticipating commercial breaks—there are still no suitably satisfying points at which to pause. Ashley is liberal, or perhaps literal, with the idea of opera. If an opera requires a theatrical setting, high drama, and rafters-directed singing, he doesn’t come close. But if it’s a medium built on a mixture of music, characters, spoken word, singing, set design, well, what else could it be? Besides, the semantic nitpicking is rendered moot once you hear the music. It all comes back to that drawl. …”
Pitchfork
40 Years Later, Robert Ashley’s ‘Private Parts’ Is Still a Hilarious Mystery (Audio)
Genius (Audio)
Discogs (Video)
YouTube: Private Parts (1978) FULL ALBUM 45:41