“ESG is the debut EP by American post-punk band ESG. It was released by 99 Records in 1981. The EP received positive reviews from music critics. ‘Moody’ became popular with house DJs, and ‘UFO’ came to be one of the most sampled tracks in hip hop music. Ed Bahlman discovered ESG while serving as the judge for a talent show and became the band’s unofficial manager. Tony Wilson from Factory Records approached the band after a performance at Hurrah in the Upper West Side of Manhattan, and three days later they began recording with Martin Hannett. They recorded ‘Moody’ and ‘You’re No Good’ in the first take. Hannett had three minutes left on the master tape, so he had the band record ‘UFO’. … ‘Moody’ was released off of ESG as the band’s debut single. A 12-inch remix single followed, and both versions found popularity at clubs in New York and London. Because of the single’s release through Factory, many New York DJs assumed ESG was a London-based act. Paradise Garage listed the song in its top 50 all-time tracks. It became a foundational track for the emerging house music scene. …”
Wikipedia
40 Years of Dancing: In Conversation with Renee Scroggins of ESG
The Quietus: “It’s Music That Makes You Dance” – ESG Interviewed
YouTube: Moody+REMIX, UFO, Dance, Earn it ESG Hey 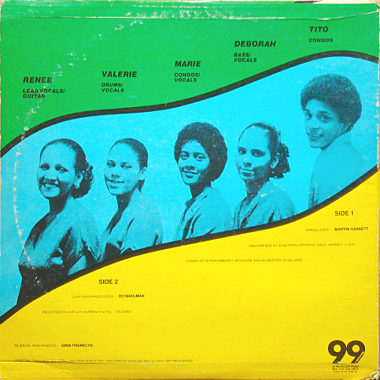