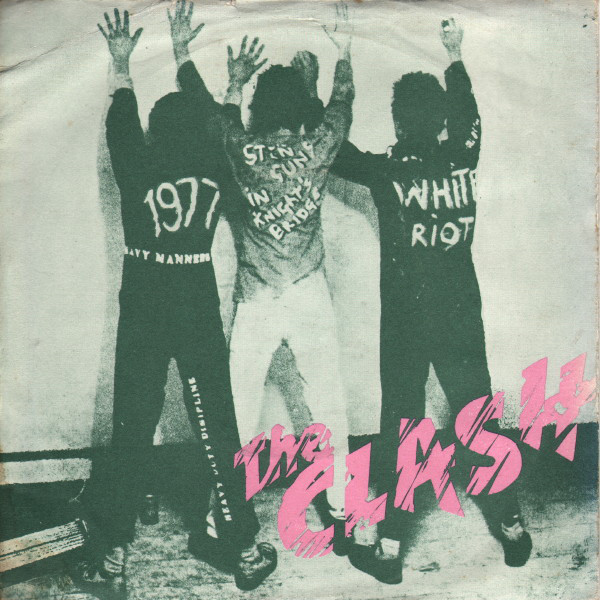 “‘White Riot’ is a song by English punk rock band The Clash, released as the band’s first single in March 1977 and also featured on their debut album. There are two versions: the single version (also appearing on the US version of the album released in 1979), and a different version on the UK album. According to their respective label copy the single version is 1:58 in running time while the UK album version is 1:55. The song is short and intense, in the typical punk style of three chords played very fast. Mick Jones counts off ‘1-2-3-4’ at the start of the album version while the single version begins with the sound of a police siren instead. Lyrically, the song is about class economics and race and thus proved controversial: some people thought it was advocating a kind of race war. The song was written after Joe Strummer and bassist Paul Simonon were involved in the riots at the Notting Hill Carnival of 1976. The single’s cover photograph was taken by Caroline Coon on 5 November 1976 at the band’s rehearsal studio in Camden Town. The photo was inspired by real-life events where youths were randomly stopped and searched by police in the street. The original shot featured the phrase ‘Hate and War’ on the back of Strummer’s boiler suit, which was airbrushed for the released version and replaced with ‘1977’. ‘White Riot’ is considered a classic in The Clash canon, although as the band matured, Mick Jones would at times refuse to play it, considering it crude and musically inept. Over two decades later, Joe Strummer would perform it with his band the Mescaleros. The B-side of the single was ‘1977’, a non-album track. This song was along similar lines to ‘White Riot’, suggesting that the music of Elvis Presley, The Beatles, and The Rolling Stones was no longer relevant. …”
Wikipedia
Genius (Audio)
SOS – CLASSIC TRACKS: The Clash ‘White Riot’
YouTube: White Riot, 1977