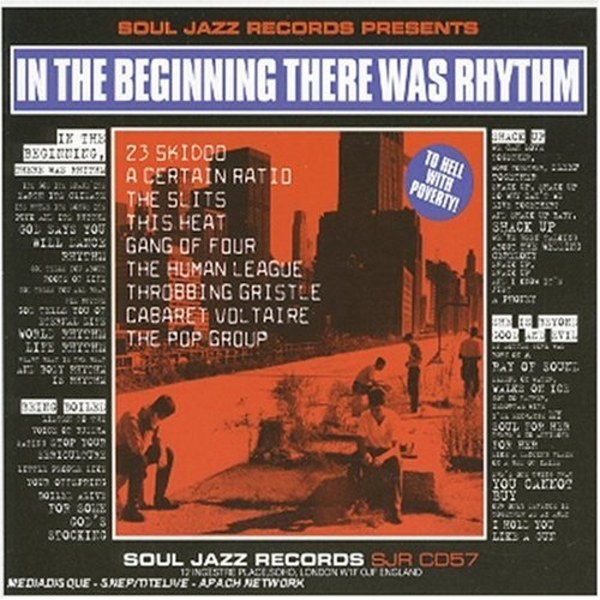 “Angular guitars, funk- and disco-influenced rhythms, dabblings with electronic gadgetry, leftist politics, a dash of irony, and vocals that aren’t so much yelled or sung as they’re chanted or detachedly intoned must mean one thing and one thing only: post-punk. At the time of In the Beginning There Was Rhythm’s release, the level of resurgent interest in the style was so high that one might’ve expected a ten-part documentary series from Ken Burns. In reality, even Burns himself could’ve told you that there wasn’t a need for a ’23 Skidoo: Ken Burns Post-Punk’ compilation by the end of 2001. (Well, actually, he would’ve left them out of the series, so the point is probably moot.) After all, that artery was plugging quickly — even the smallest blips on the U.K. 1978-1982 radar were re-registering with releases that paired small-time pressings of singles with live shows and otherwise abandoned material. … Within its tightly wrapped confines, In the Beginning demonstrates post-punk’s breadth, showcasing within the grooves, jabs, and rattling waves of static the style’s influences (disco, funk, reggae, Krautrock, electronic experimentation) and the styles that the style influenced (indie rock, post-rock, almost every stripe of dance music that followed) at the same time. … Topping it off is a thick booklet full of photos and liner notes that cover each band and tie the music in with the social climate they were residing in. And while one might bemoan the exclusion of Public Image Limited, Associates, the Normal, Magazine, or other bands crucial to the ideology, there’s no denying that In the Beginning There Was Rhythm is a great gateway into this expansive, fruitful, trailblazing era.”
allmusic (Audio)
Pitchfork
Discogs (Video)
YouTube: In The Beginning There Was Rhythm 11 videos