“… Most of the best material from his early albums is present here, including ‘Spanish Stroll,’ ‘Mixed Up, Shook Up Girl,’ ‘Guardian Angel,’ ‘Cadillac Walk,’ ‘Steady Drivin’ Man,’ and ‘Soul Twist.’ He gives a memorable vocal performance on a number of these songs, especially, ‘Soul Twist.’ … By the late-1970s, he had formed his own band, entitled Mink DeVille, which operated as a group and as a musical foundation for the songs DeVille was writing and singing. They quickly gained acceptance by the punk and alternative music scene, which revolved around New York’s legendary CBGB club. After doing three songs on the indie compilation, Live At CBGBs, Mink DeVille was signed to Capitol Records and produced by legendary Phil Spector/Wall-Of-Sound arranger, Jack Nitzsche. DeVille had an affinity with the classic Spector recordings and the music of the Brill Building, and he also had a deep love of Latin, blues, and folk music. …”
YouTube: Full Concert – 06/07/78 – Winterland 40:59 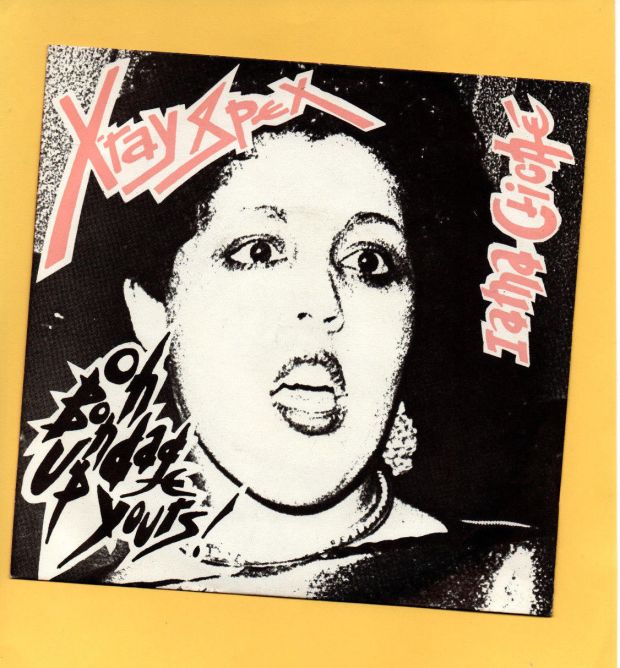 “Strictly speaking, X-Ray Spex is a British punk band, not an American riot grrrl act. That being said, it’s hard to talk about Riot Grrrl without talking about the band’s 1977 single, ‘Oh Bondage, Up Yours!’ Though X-Ray Spex frontwoman Poly Styrene says the track is more anti-capitalist than it is feminist, it’s become synonymous with the riot movement. A lot of that has to do with its opening line—’Some people think little girls should be seen and not heard / But I think, oh bondage, up yours!’—but it’s easy enough to draw a direct line from Styrene’s guttural wails to similar sounds and sentiments delivered 15 years later by riot grrrl icons like Bikini Kill’s Kathleen Hanna and Bratmobile’s Allison Wolfe and Molly Neuman. Whether she intended it or not, Styrene planted the seed for a movement that would take root and blossom more than a decade later.”
AV Club
W – Oh Bondage, Up Yours!
YouTube: Oh Bondage, Up Yours! 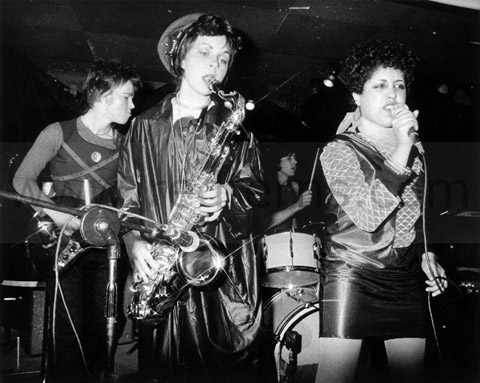 David Johansen in front of Max’s Kansas City awning, NYC . August 1980.
“Max’s Kansas City was the place to be in 1970s New York, when the city was bursting with cultural imagination. This was before New York went corporate, when the city was vibrant, messy and a trip to Max’s Kansas City on Eighteenth Street and Park Avenue South meant being served by Debbie Harry, your waitress for the night, and sharing the visible air with the likes of William S. Burroughs, Robert Mapplethorpe, Andy Warhol, John Cale, Allen Ginsberg, Robert Rauschenberg, David Bowie, Iggy Pop, Lou Reed, Candy Darling, Jackie Curtis and Holly Woodlawn. Max’s Kansas City was where you watched an unknown named Bob Marley open for an only slightly less unknown Bruce Springsteen. …”
flashbak
W – Max’s Kansas City
Vanity Fair: They All Hung Out at Max’s

“In March of 1978, a handful of European prog rock bands performed at a small music festival in London called Rock in Opposition. The event was conceived by the outsider British band Henry Cow, who had found kindred spirits in avant-prog outfits in countries like Sweden, Belgium, and France, and their slogan was, ‘The music the record companies don’t want you to hear.’ For a couple years, RIO became a quasi-formal anti-establishment collective, and the arty Belgian avant-rock band Aksak Maboul joined its ranks as part of a second-wave expansion. At the time, Aksak Maboul were exploding their experimental ambitions, a charge spearheaded by co-founder Marc Hollander. The weird, tangled sophomore album they released in 1980, Un Peu De L’Âme Des Bandits, is just now receiving its first vinyl reissue on the same pivotal independent label it spawned nearly 40 years ago. …”
Pitchfork (Audio)
W – Un Peu de l’Âme des Bandits
bandcamp (Audio)
YouTube: Un Peu De L’Ame Des Bandits [Full Album]

“Years after the release of Run-D.M.C.‘s eponymous 1984 debut, the group generally was acknowledged to be hip-hop’s Beatles — a sentiment that makes a lot of sense, even if Run-D.M.C. isn’t quite the equivalent of a rap Please Please Me. Run-D.M.C. were the Beatles of rap because they signaled a cultural and musical change for the music, ushering it into its accepted form; neither group originated the music, but they gave it the shape known today. But, no matter how true and useful the comparison is, it is also a little misleading, because it implies that Run-D.M.C. also were a melodic, accessible group, bringing in elements from all different strands of popular music. No, Run-D.M.C.‘s expanded their music by making it tough and spare, primarily by adapting the sound and attitude of hard rock to hip-hop. Prior to this, rap felt like a block party — the beats were funky and elastic, all about the groove. Run-D.M.C. hit hard. The production is tough and minimal, built on relentless drum machines and Jam Master Jay‘s furious scratching, mixing in a guitar riff or a keyboard hit on occasion. It is brutal urban music, and Run and D.M.C.‘s forceful, muscular rhymes match the music. Where other MCs sounded cheerful, Run and D.M.C. prowl and taunt the listener, sounding as if they were a street gang. And while much of the record is devoted to braggadocio, boasting, and block parties, Run-D.M.C. also addressed grittier realities of urban life, giving this record both context and thematic weight. All of this — the music, the attitude, the words, the themes — marked a turning point for rap, and it’s impossible to calculate Run-D.M.C.‘s influence on all that came afterward. Years later, some of the production may sound a bit of its time, but the music itself does not because music this powerful and original always retains its impact and force as music.”
allmusic
W – Run-D.M.C.
Pitchfork
YouTube: Full Concert – 09/25/84 – Capitol Theatre (OFFICIAL)
YouTube: Run D.M.C Deluxe Edition [Full Album] 57:25

“Like the epochal Police & Thieves by Junior Murvin, which also originated at Lee ‘Scratch’ Perry‘s Black Ark Studio and thus shares with this album Perry‘s trademark dark, swampy ambience, War ina Babylon is something of a mountain on the reggae landscape. But what makes it so remarkable is not just the consistently high quality of the music — indeed, by 1976 one had come to expect nothing but the finest and heaviest grooves from Perry and his studio band, the Upsetters — rather, it’s the fact that Max Romeo had proved to be such a convincing singer of cultural (or ‘conscious’) reggae after several years of raking it in as a purveyor of the most abject slackness. (His ‘Wet Dream’ had been a huge hit in England several years earlier, and had been followed by such other delicacies as ‘Wine Her Goosie’ and ‘Pussy Watch Man.’) But there’s no denying the authority of his admonishing voice here, and the title track (which describes the violent mood during Jamaica’s 1972 general election) has remained a standard for decades. Other highlights include ‘One Step Forward’ and ‘Smile Out a Style.’ Essential to any reggae collection.”
allmusic
W – War ina Babylon
Lee “Scratch” Perry and the Golden Age of Roots: ‘War Ina Babylon’
YouTube: Max Romeo – War Ina Babylon 37:52

“Following the viral success of their first single, ‘Rock Lobster’, off their 1979 self-titled debut album, The B-52s had to prove they were more than just a wacky novelty act. Hailing from Athens, Georgia, the eccentric quintet had already won over New York’s downtown club scene and even inspired John Lennon to write again, but they had yet to get everyone to join their party. The group’s motley mix of surf rock, new wave, girl group and post-punk sounds confused critics and audiences alike, but The B-52s’ sophomore album, Wild Planet, was about to live up to their title of ‘World’s Greatest Party Band’. The B-52s don’t engender the same kind of cultural criticism as, say, Devo, Talking Heads and their other new wave contemporaries, yet they were post-punk pioneers in their own right. With their dissonant jams, absurdist lyrics and kitschy 60s aesthetic, the group ambushed the pop mainstream, and their influence now looms larger than their towering bouffants. …”
‘Wild Planet’: How The B-52s Partied Out Of Post-Punk’s Bounds (Audio/Video)
W – Wild Planet
Spectrum Culture (Video)
YouTube: Private Idaho (Live), Give Me Back My Man (Live)
YouTube: Wild Planet 9 videos